Fulham Palace through the Great War

Running at Fulham Palace until 16 April 2015 (with some closure periods over Christmas), there is a free exhibition entitled ‘Fulham Palace through the Great War’.

The exhibition tells the story of the Great War at Fulham Palace, the role of the Bishop of London during the national crisis and commemorates those connected with the household who died in the conflict, such as William Burley, the son of the Bishop’s chauffeur.

The Lord Bishop of London, Chaplain to the London Rifle Brigade

At the outbreak of war in 1914, Bishop Winnington-Ingram proved an enthusiastic “recruiting sergeant”. He spent two weeks at the Western Front in 1915, staying with Field Marshal French, addressing troops at Ypres, and visiting the London Rifle Brigade. At home he faced pressure to release land for food production.

Finally in 1918 the Council took possession of the Palace Meadow for allotments and the Palace itself was occupied by the Freemasons War Hospital Number Two, run by the Red Cross. The Porteus Library and Drawing Room became wards and the more mobile patients assisted in the garden. It closed in 1919. Several clergymen who were to become Bishops of London served in the war as army chaplains, including Henry Montgomery-Campbell, who was awarded the Military Cross for bravery at Gallipoli.

The Museum has just acquired an autograph album, which belonged to Sister Mary Latchmore, one of the nurses at the hospital. It includes photographs of the patients, the nurses and some of the Palace rooms when in use as a hospital. 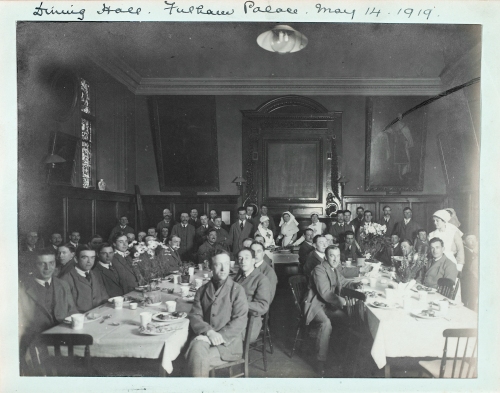 Among the items on show at the Exhibition is the Roll of Honour of the Great War 1914-1918 of the Metropolitan Borough of Fulham, which is on loan from the Archives and Local History Centre.

On January 15 1919, the Council of the Metropolitan Borough of Fulham resolved to organise a public subscription for the erection of a War Memorial to honour those from the Borough who gave their lives in the Great War.

An illuminated role of honour of names of those who were killed in action or died of wounds was commissioned from Dorothy Hutton, of 181 King’s Road, Chelsea, a painter and calligrapher, who studied at the Central School of Arts and Crafts in the 1920s She completed the book in 1921 for which she was paid £100…. It was bound in vellum and placed in a decorated mahogany casket for display in Fulham Library. The whereabouts of the casket is now unknown,

The roll contains an alphabetical list of men, and one woman, noting military honours and some ranks. Regimental particulars and date of death are not given. The roll was compiled from forms returned by family members and it has a number of known omissions. The entry for William Burley, the son of the Bishop’s coachman is on the left, third from the bottom.

3 Responses to Fulham Palace through the Great War