Why are there Barbican-like buildings in Victorian Fulham?

Deep in the rows of Victorian terraces between the Fulham Road and the Munster Road sits a gem of modern thoughtful design. It looks like a displaced piece of the Barbican! What’s more there is another larger block opposite Fulham Broadway tube station.
How did they get there?  The answer can be found in the local Archives.

Reporton Road originally ran from Munster Road to Filmer Road but the new block makes it a cul-de-sac. In this view St Peter’s church is just visible beyond the left hand terrace.
The area was badly damaged in both the early war bombings of 1940/41 and the V2 raids of 1944.

The scale of the damage can be seen from photographs in the archive, this one showing the complete destruction of St Peter’s Terrace and the ends of Kilmaine and Reporton Roads.  There was also irreparable damage to 53-57 Reporton Road.

The council soon (August 1945)  had 8 pre-fab bungalows on the site opposite the church and by 1951 had replaced 53-57 with in-fill flats that although different in style fitted the profile of the terrace.

As the economy recovered there was a desire to improve the Victorian terraces and to re-house people.  Tower blocks were a solution that was popular with some architects and planners but not necessarily with residents. Hammersmith Council was keen to find a solution, commissioning architects Higgins and Ney to produce a design. They made the large site at the end of Reporton and Kilmaine Roads available for a prototype.

Higgins proposed ‘High-Deck Living’ as a low-rise alternative, with ground floor flats around a central garage and two two floor masionettes above each flat but facing onto a high level street above the garage – creating a safe area for children. There are 34 homes altogether known as 19-60 St Peter’s Terrace. The now cut-off houses at 1-17 Reporton Road became St Peter’s Terrace too.

The large vicarage to St Peter’s was demolished in 1978 and replaced with sheltered housing and a smaller modern vicarage, completing the arrangement we see today. 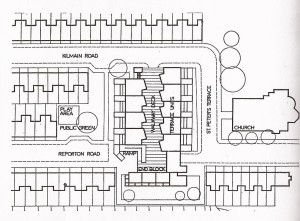 The development attracted a lot of media interest with articles in the Daily Telegraph and Guardian as well as local papers. It was also the subject of a US university study and articles in British and German architectural journals. In September 1970 it received the Civic Trust Award and by then the council was already building a 121 home version in Moore Park Road: Walham Green.

This block has integrated shops and a 7 storey block of flats. Plans to build a further 364 homes in this style never came to fruition and, as in the rest of London, the ‘poor Victorian’ housing lived on to become the £1million homes of today.

8 Responses to Why are there Barbican-like buildings in Victorian Fulham?