Christina Broom lived most of her life in Fulham, from about 1904 until the death of her husband in 1912 at 38 Burnfoot Avenue and then she and her daughter, Winifred, moved to 92 Munster Road. She took thousands of photographs of people and places in London, many of which she printed and sold as postcards and many others she sold to the newspapers.

I have used her photographs in a previous blog on the Boat Race but return to her as a subject in her own right as the Museum of London Docklands currently has an excellent exhibition of her work (see below) and the curator of the exhibition is coming to speak to the Fulham & Hammersmith Historical Society in September.

The Hammersmith & Fulham Archives holds a number of photographs of Christina herself as well as her work.

Christina Livingston was born at 8 Kings Road, Chelsea in 1863 and this photograph was taken in 1889, a few days before her marriage to Albert Broom.

Albert worked in the family ironmongery and he and Christina moved to 4 Napier Avenue (now no 8) which was owned by Albert’s father.  Their only child, Winifred, was born there in 1890. After an accident in 1896 – he was hit on the shin by a cricket ball and the bone never properly healed – it was difficult for Albert to work and he and Christina opened a stationery shop in Streatham. However, it did not succeed and they had to give up the shop.

Christina needed to find a way to make a living to support the family. They moved to Burnfoot Avenue and at the age of 40 she borrowed a camera and started taking photographs which she then sold. There were other female photographers at that time but they tended to take studio portraits whereas Mrs Albert Broom, as she was known professionally, recorded public events, took outdoor scenes and went searching for her subjects.  Here she is with her camera in 1910 prior to King Edward VII’s funeral: 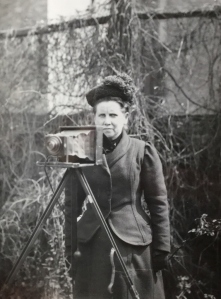 She was much helped by her daughter Winifred who was her sole assistant and who developed the negatives and printed the postcards. Here they both are in about 1920:

Mother and daughter at the Mayor’s Reception at Fulham Town Hall, 1934

The last one I could find in our holdings was this rather more attractive photograph dated 1936, apparently taken by a member of the Oxford boat crew:

Christina and Winifred sold their work to shops, magazines and the newspapers (hence her reputation as a press photographer) and the public.  The picture of her stall at the British Women’s War Exhibition in 1916 taken by Winifred shows the many postcards that she sold:

Picture postcards had become very popular at the beginning of the 1900s and Christina took advantage of this. Perhaps she realised their potential from her time running the stationery shop but from 1903 when she published her first cards to about 1915 she and Winifred published thousands. Apparently at their busiest the mother and daughter team could produce a 1,000 cards a day!

Broom’s work can be divided into various categories – the suffragettes, the army, royalty, local views and areas particularly in South West London, and the boat race. The original negatives of “local views and personalities” were apparently given to Fulham Library but most now seem to be in the Museum of London. Some individual streets as photographed by Mrs Broom appear in the Hammersmith & Fulham Archive holdings and we do have a collection of early postcards, some of which are by “Mrs Albert Broom”. I suspect there are more distributed amongst the Archives’ files but here are some examples of those I found.

These two, rather faded, sepia photographs were taken at Fulham Palace on the occasion of a visit by the Duchess of Albany about 1910. In both cases you can see the ‘Broom’ signature in the corner.

Here is a postcard of some rather sinister nuns at the Chelsea Historical Pageant in 1908.

On this the ‘Mrs Albert Broom’ details are down the side on the reverse. 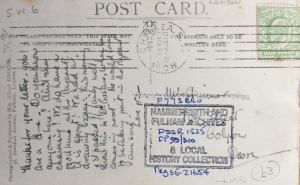 “… Do you know anyone here? Ain’t she charming? We do have a good time at the pageant. It is sport! I had a drawing exam this morning & I passed. …”

And this card is of Christina herself, presumably taken by her daughter, at the Army Pageant at Fulham Palace in 1910.

The London Museum exhibition has concentrated particularly on the pictures taken by Mrs Broom of the suffragettes and the army. She appears to have been interested in the suffragette movement for its commercial value rather than from any political ideology. The London Museum, and the Imperial War Museum both have a large collection of army prints, of individuals of all ranks, everyday life and preparations for war.

I could only find two of her postcards on these topics in the Hammersmith & Fulham holdings. Both have been reprinted by the National Portrait Gallery:

A group of Suffragettes

The London Museum has made prints from some of the Broom original plates especially for their exhibition and these are amazing and show the detail so clearly.  They really emphasise what an excellent photographer this self-taught woman was.

The Photography of Christina Broom, Museum of London Docklands, until 1 November.